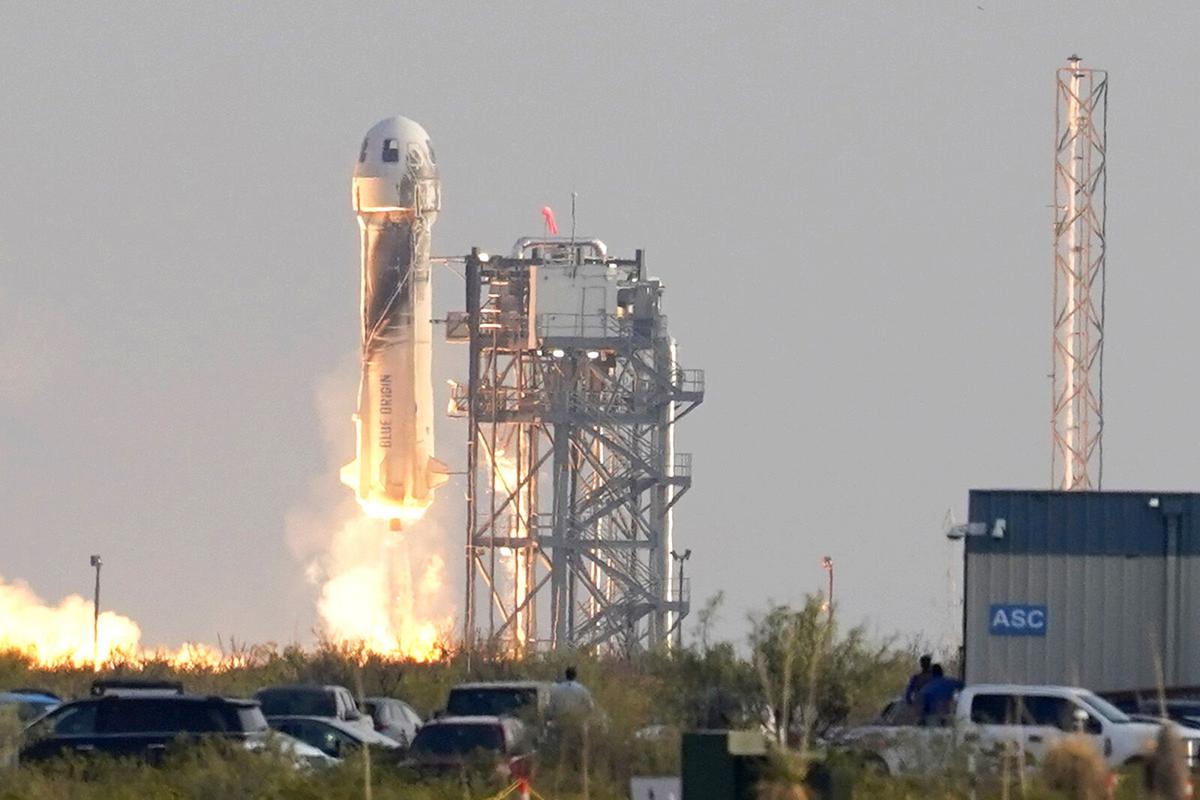 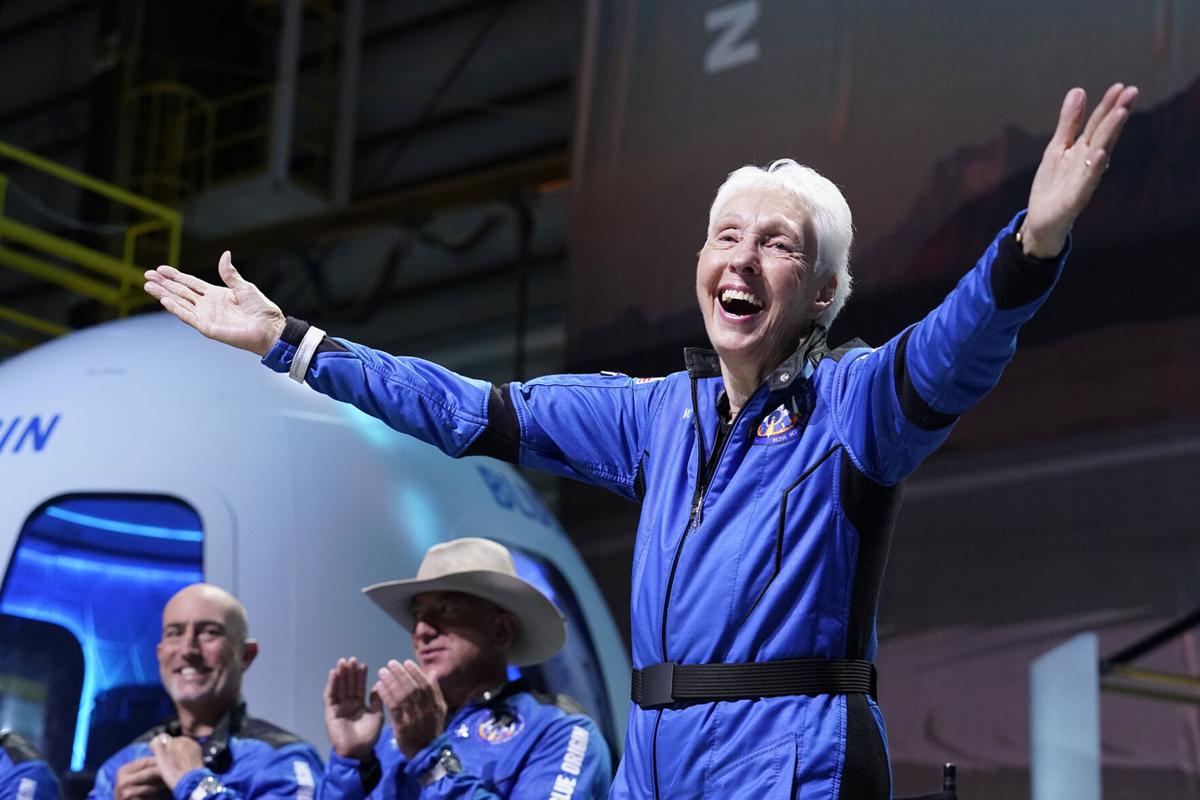 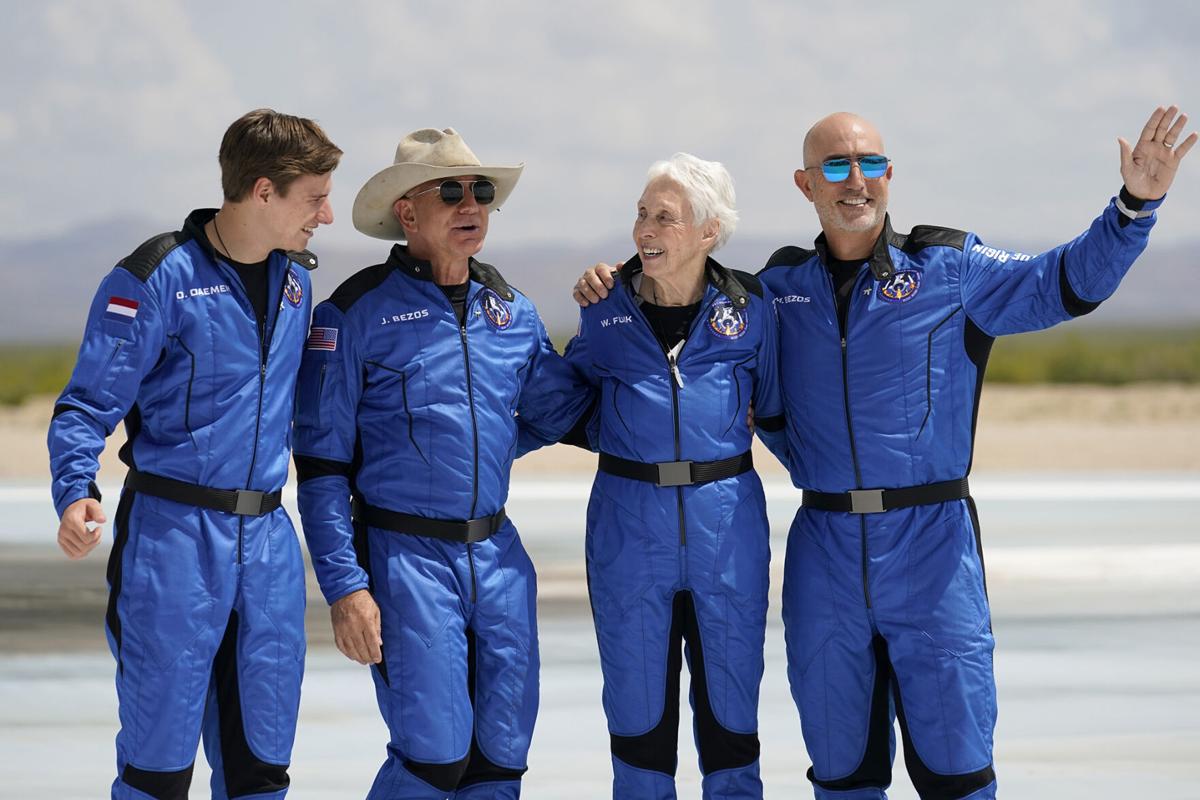 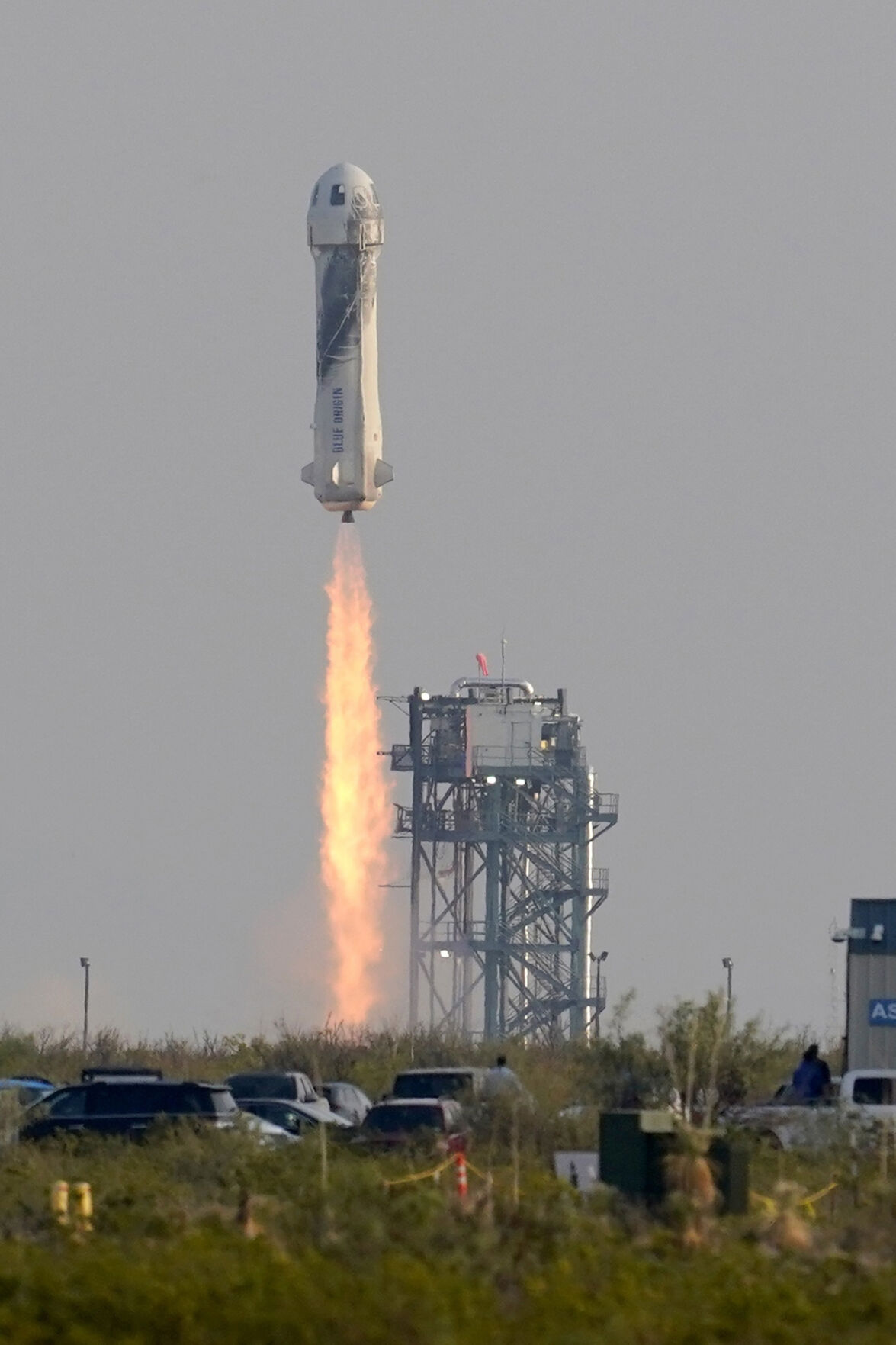 VAN HORN — Jeff Bezos blasted into space Tuesday on his rocket company’s first flight with people on board, becoming the second billionaire in just over a week to ride his own spacecraft.

The Amazon founder was accompanied by a hand-picked group: his brother, an 18-year-old from the Netherlands and an 82-year-old aviation pioneer from Texas — the youngest and oldest to ever fly in space.

“Best day ever!” Bezos said when the capsule touched down on the desert floor in remote West Texas after the 10-minute flight.

Named after America’s first astronaut, Blue Origin’s New Shepard rocket soared on the 52nd anniversary of the Apollo 11 moon landing, a date chosen by Bezos for its historical significance. He held fast to it, even as Virgin Galactic’s Richard Branson pushed up his own flight from New Mexico in the race for space tourist dollars and beat him to space by nine days.

Unlike Branson’s piloted rocket plane, Bezos’ capsule was completely automated and required no official staff on board for the up-and-down flight.

Blue Origin reached an altitude of about 66 miles, more than 10 miles higher than Branson’s July 11 ride. The 60-foot booster accelerated to Mach 3 or three times the speed of sound to get the capsule high enough, before separating and landing upright.

During their several minutes of weightlessness, video from inside the capsule showed the four floating, doing somersaults, tossing Skittles candies and throwing balls, with lots of cheering, whooping and exclamations of “Wow!” The Bezos brothers also joined their palms to display a “HI MOM” greeting written on their hands. The capsule landed under parachutes, with Bezos and his guests briefly experiencing nearly six times the force of gravity, or 6 G’s, on the way back.

Led by Bezos, they climbed out of the capsule after touchdown with wide grins, embracing parents, partners and children, then popped open bottles of sparkling wine, spraying one another.

“My expectations were high and they were dramatically exceeded,” Bezos said later.

Their flight lasted 10 minutes and 10 seconds — five minutes shy of Alan Shepard’s Freedom 7 flight in 1961. Shepard’s daughters, Laura and Julie, were introduced at a press event a few hours later.

Sharing Bezos’ dream-come-true adventure was Wally Funk, from the Dallas area, one of 13 female pilots who went through the same tests as NASA’s all-male astronaut corps in the early 1960s but never made it into space.

“I’ve been waiting a long time to finally get it up there,” Funk said.

Joining them on the ultimate joyride was the company’s first paying customer, Oliver Daemen, a last-minute fill-in for the mystery winner of a $28 million charity auction who opted for a later flight. The Dutch teen’s father took part in the auction, and agreed on a lower undisclosed price last week when Blue Origin offered his son the vacated seat.

“It was so amazing,” Daemen said. “Let’s hope that many, many more people can do this.”

Four hours after their flight, Bezos drove his crew over to see the rocket that carried them safely to space. “Can’t believe we did it,” Funk said.

Among the items brought on the flight: A pair of aviator Amelia Earhart’s goggles and a piece of fabric from the original Wright Flyer.

“I got goose bumps,” said Angel Herrera of El Paso, who watched the launch from inside Van Horn High School, about 25 miles away. “The hair on the back of my neck stood up, just witnessing history.”

“This ride is only for the wealthy,” pizza shop owner Jesus Ramirez said after watching the launch, adding that he hoped the venture would attract businesses to the town and provide opportunities for local companies.

Blue Origin — founded by Bezos in 2000 in Kent, Washington, near Amazon’s Seattle headquarters — hasn’t revealed its price for a ride to space but has lined up spots for other auction bidders. Ticket sales, including the auction, are approaching $100 million, Bezos said. Two more flights are planned by year’s end.

The recycled rocket and capsule used Tuesday flew on the last two space demos, according to company officials.

Virgin Galactic already has more than 600 reservations at $250,000 apiece. Founded by Branson in 2004, the company has sent crew into space four times and plans two more test flights from New Mexico before launching customers next year.

Blue Origin’s approach was slower and more deliberate. After 15 successful unoccupied test flights to space since 2015, Bezos finally declared it was time to put people on board. The Federal Aviation Administration agreed last week, approving the commercial space license.

Bezos, 57, claimed the first seat. The next went to his 50-year-old brother, Mark Bezos, an investor and volunteer firefighter, then Funk and Daemen. They spent two days together in training.

University of Chicago space historian Jordan Bimm said the passenger makeup is truly remarkable. Imagine if the head of NASA decided he wanted to launch in 1961 instead of Shepard on the first U.S. spaceflight, he said in an email.

“That would have been unthinkable!” Bimm said. “”It shows just how much the idea of who and what space is for has changed in the last 60 years.”

Bezos stepped down this month as Amazon’s CEO and last week donated $200 million to renovate the National Air and Space Museum.

Fewer than 600 people have reached the edge of space or beyond. Until Tuesday, the youngest was 25-year-old Soviet cosmonaut Gherman Titov and the oldest at 77 was Mercury-turned-shuttle astronaut John Glenn.

Both Bezos and Branson want to drastically increase those overall numbers, as does SpaceX’s Elon Musk, who’s skipping brief space hops and sending his private clients straight to orbit for tens of millions apiece, with the first flight coming up in September.

“We are going to build a road to space so our kids and their kids can build the future,” Bezos said. “We need to do that to solve the problems on Earth.”

Despite appearances, Bezos and Branson insist they weren’t trying to outdo each other by strapping in themselves. Bezos noted this week that only one person can lay claim to being first in space: Soviet cosmonaut Yuri Gagarin, who rocketed into orbit on April 12, 1961.

Branson sent a congratulatory tweet: “Impressive! Very best to all the crew from me and all the team” at Virgin Galactic.

Blue Origin is working on a massive rocket, New Glenn, to put payloads and people into orbit from Cape Canaveral, Florida. The company also wants to put astronauts back on the moon with its proposed lunar lander Blue Moon; it’s challenging NASA’s sole contract award to SpaceX.

Included in the many people that Bezos thanked Tuesday was “every Amazon employee and every Amazon customer. Because you guys paid for all this.” Bezos has said he finances the rocket company by selling $1 billion in Amazon stock each year.