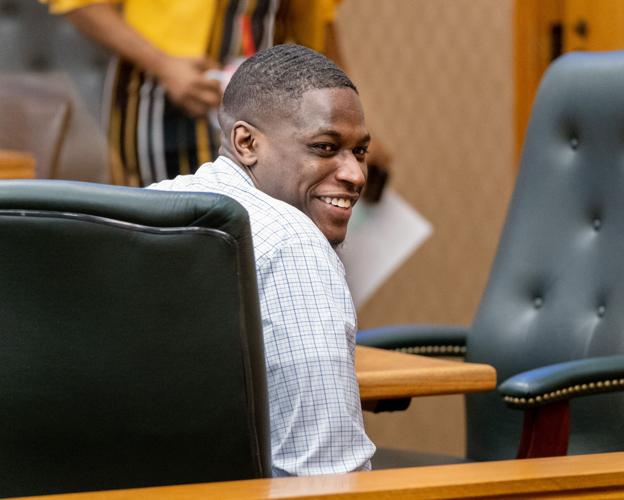 Ladadrian King sits Tuesday in the courtroom during his trial on a murder charge in the 2018 death of Henry England Williams. (Michael Cavazos/ News-Journal Photo) 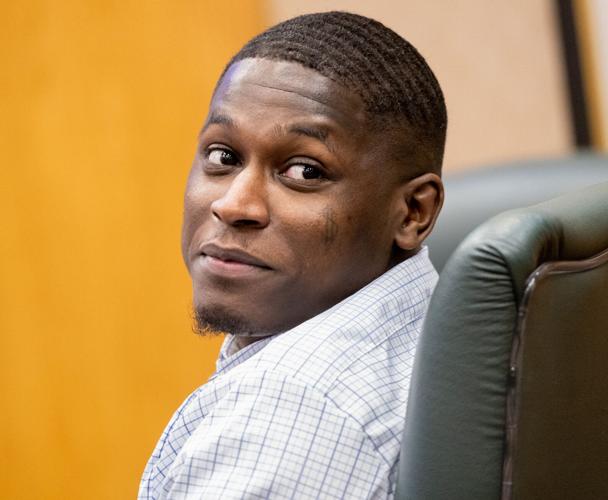 A jury on Wednesday found Ladadrian King guilty of murder in the 2018 death of Henry England Williams.

Ladadrian King sits Tuesday in the courtroom during his trial on a murder charge in the 2018 death of Henry England Williams. (Michael Cavazos/ News-Journal Photo)

A jury on Wednesday found Ladadrian King guilty of murder in the 2018 death of Henry England Williams.

A jury on Wednesday evening found 26-year-old Ladadrian Deontae King guilty of murder in the 2018 death of a man who was shot multiple times on the front porch of his Longview home.

After two days of testimony in the 124th District Court and about three hours of deliberation, the jury just before 7 p.m. Wednesday found King guilty of killing Henry England Williams, 32.

Sentencing is set to begin at 9 a.m. Wednesday.

Williams was shot Sept. 29, 2018, and died on his way to the hospital. According to testimony Wednesday, King posted a video of himself on social media and appeared to be referencing Williams’ death shortly after the incident.

Witness Remain Sutton, who was supposed to meet up with Williams the night of the shooting but said she fell asleep, said she recalled King in the video saying, “That’s not my work,” and, “I will beat this case.”

“This situation is a game,” she said when asked what she thought of King’s video.

Two minutes of the 10- to 15-minute video were played and discussed during Sutton’s testimony. King’s speech was fast, filled with expletives and difficult to understand.

“There’s a reason why I did it,” he said at the end of the video.

Williams was found shortly after midnight having been shot multiple times on the porch of his home in the 1100 block of Clover Lane. Police found Williams standing, hunched over and leaning on a ramp railing outside of the home.

“I woke up to, like, a bunch of calls and messages,” Sutton said of the early morning hours. “(Williams) had been shot, and I just remember hearing those and I was just crying.”

When Williams died, Sutton was pregnant with his daughter. The child is now 3 years old. Williams has six children.

According to Sutton, King was seeing or dating the mother of one of Williams’ children.

Forensic pathologist Gulpreet Bowman conducted the autopsy and testified in court Wednesday morning. Williams was shot through the back, with two bullets traveling through his chest cavity. His liver was hit, and his lungs were perforated. A bullet also struck his arm.

Before his death, Williams told investigators who killed him. According to testimony, he said it was “Black-D” and added that it was “him and his partner.”

At least two officers at the scene knew of “Black-D” and knew him as King. Police also used a Texas Department of Public Safety gang database to help identify King as the suspect, according to reports.

Jefferson was booked Jan. 3, 2019, into the Gregg County Jail on a grand jury indictment of murder and a charge of possession of between 3 and 28 grams of marijuana. Stanley was arrested Dec. 17, 2018, initially on unrelated drug charges. He was also indicted by a grand jury on a murder charge.

Testimony begins in trial of man accused in 2018 Longview murder

In his final moments, a Longview man who died from gunshot wounds in 2018 identified his kil…

Before sentencing began Thursday for a man found guilty of murder in a 2018 Longview shooting death, another man pleaded guilty in the same in…