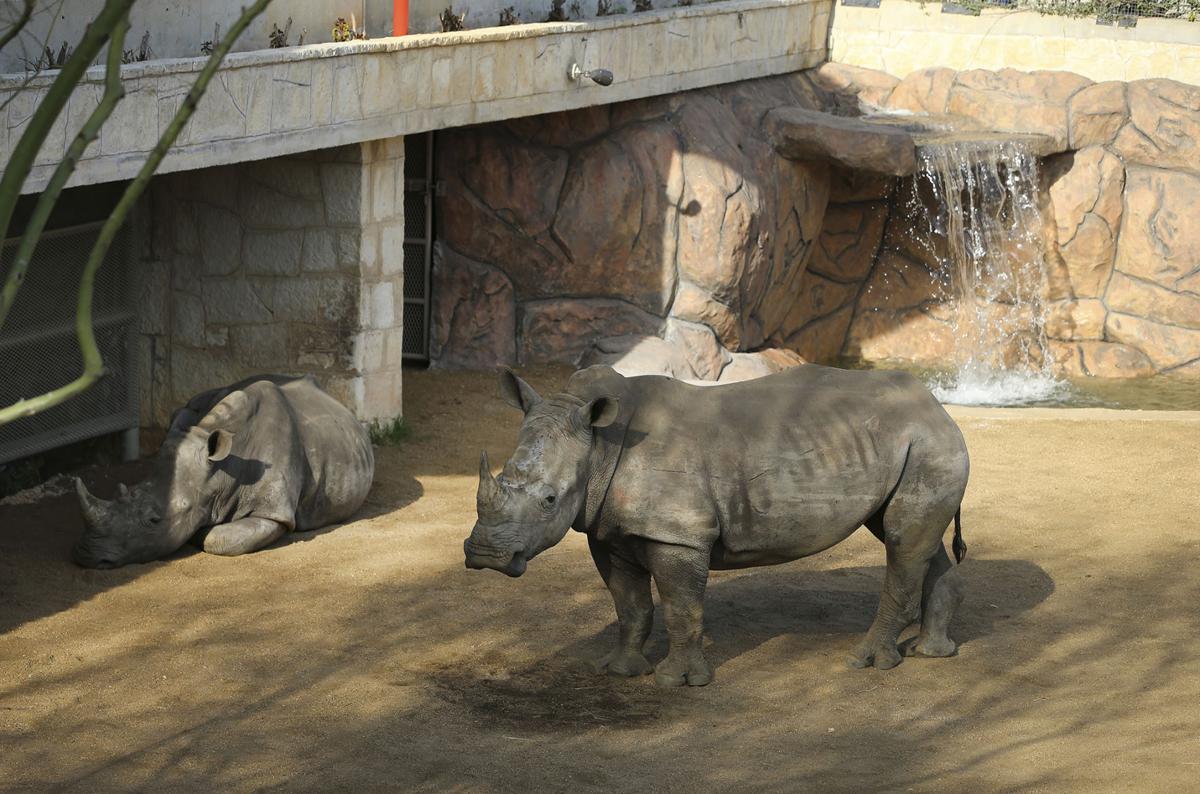 Nyota, right, and Ophelia, two new southern white rhinos, arrive Feb. 27 at the San Antonio Zoo in San Antonio. The arrival of the rhinos signals the opening of the enlarged savanna habitat, which includes landscaping, trees, a waterfall and several additional species. 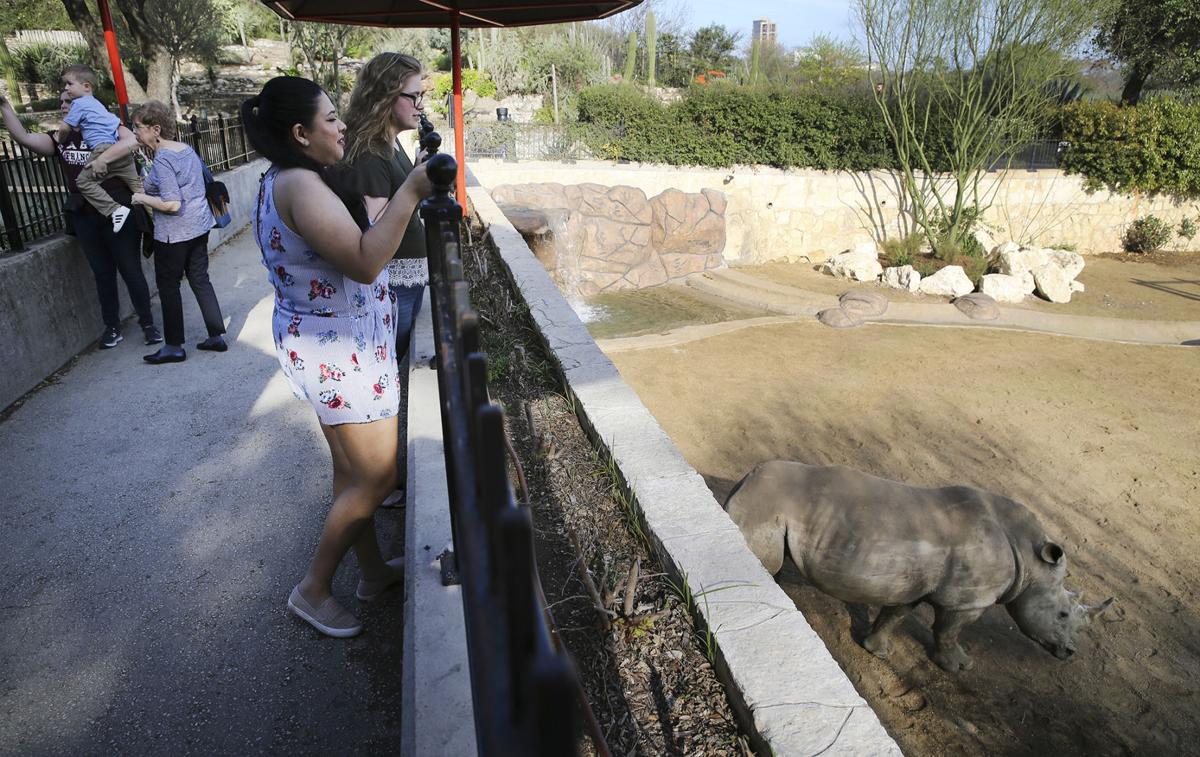 Nicolette Osio, front left, and her friend Marie Southern stop Feb. 27 to view a pair of southern white rhinos, Nyota (pictured) and Ophelia, at the San Antonio Zoo. The arrival of the rhinos signals the opening of the enlarged savanna habitat, which includes landscaping, trees, a waterfall and several additional species.

Nyota, right, and Ophelia, two new southern white rhinos, arrive Feb. 27 at the San Antonio Zoo in San Antonio. The arrival of the rhinos signals the opening of the enlarged savanna habitat, which includes landscaping, trees, a waterfall and several additional species.

Nicolette Osio, front left, and her friend Marie Southern stop Feb. 27 to view a pair of southern white rhinos, Nyota (pictured) and Ophelia, at the San Antonio Zoo. The arrival of the rhinos signals the opening of the enlarged savanna habitat, which includes landscaping, trees, a waterfall and several additional species.

SAN ANTONIO — The San Antonio Zoo’s newest experience invites guests into the heart of a rhino habitat, set in verdant landscaping on a natural dirt surface similar to the grassy plains of Africa.

At a recent visit, Nyota and Ophelia, the 2-year-old southern white rhinos who arrived in the Alamo City several weeks ago, appeared to be settling in well at their new home. They will be joined by a young male in hopes of restarting a breeding program for the endangered mammals.

The habitat is part of The Savanna exhibit, which includes zebras and giraffes. A waterfall spills into a creek for the pair of rhinoceroses to splash in and roll around. The landscape includes Palo Verde trees and colorful flower beds, flush with snapdragon and dianthus blooms.

A viewing deck extends over the rhino exhibit, allowing visitors to get a closer look at the zoo’s newest mammals. The deck was built with posts of local timber and planks made of recycled plastic called Trex. Invisimesh lining at the top gives the viewer an open view that appears invisible from side angles.

Animals in the different habitats that make up The Savanna will be able to roam freely across the grasslands. Zebras already have peered at the rhino habitat through gates underneath the deck. Other animals that also live on the African savannah will be introduced in the months to come.

At the time the plans for the new habitat were announced last summer, rhino advocates were pleased.

“It will be a very rich environment for those animals with lots of stimulation,” said Susie Ellis, executive director of the International Rhino Foundation. “It’s much like the wild.”

At the entrance to the exhibit is the striking 17-foot-tall bronze sculpture of endangered northern white rhinos brought in from New York. Created by artists Gillie and Marc Schattner, it’s named “The Last Three” in honor of the last three living northern white rhinos.

Sudan, the last male and one of the models for sculpture, died last March at the age of 45. His daughter and granddaughter are the last living northern white rhinos; they are the other two in the artwork. Unless there’s a miracle development with in vitro fertilization, their species will go extinct when they die.

“Rhino populations are dwindling worldwide due to habitat destruction and poaching,” said Tim Morrow, the San Antonio Zoo’s president and CEO. “Future rhino births will carry on a decades-long tradition of successes in San Antonio that will greatly contribute to the association of zoos and aquarium special survival plan for this species.”

In 1972, the San Antonio Zoo was the first facility in the nation to have a successful birth of a white rhino.

Morrow said the $1 million rhino habitat project was a year in the making. He said the habitat is part of the zoo’s mission to have a new or upgraded exhibit each year.

“People will see something different every time they come,” Morrow said.

“We had a window and we had to take it,” said Jonathan Reding, director of mammals. “If we waited too long they would go somewhere else.”

In August, when the renovations began, the zoo’s lone southern white rhino, 21-year old Kuto, was relocated to Natural Bridge Wildlife Park, where zoo keepers said he has found a girlfriend. Kuto will stay there, officials said.

Morrow said he and Reding penned the design for the new rhinoceros exhibit on a napkin while waiting for a flight from Dallas-Fort Worth International Airport. Sol Studio Architects developed a blueprint from the sketch.

One of the key features of the exhibit is the huge rhino sculpture, which was brought here from Brooklyn. The artwork is linked to an augmented reality app that allows viewers to protect and adopt the northern white rhinos.

After downloading the app, visitors will be able to see the likeness of rhinos wandering within the area of the sculpture. More than 75 percent of the app’s proceeds will benefit the Ol Pejeta Conservancy in Kenya, where the remaining two northern white rhinos make their home.