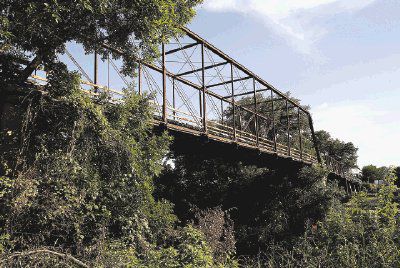 The Clifton Whipple Truss wood-and-asphalt bridge near Clifton, built in 1884, is the last functioning bridge of its kind in the state. "This is a bridge built by our founders," said Leon Smith, a former mayor and Clifton Record editor who is on the Bosque County Historical Commission. 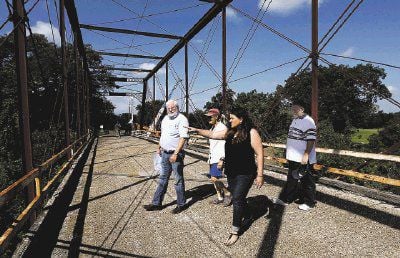 Clifton residents Ashley Abel, center, points down stream while walking on the Whipple truss bridge with Leon Smith, left, Deb Tolman, and Jim Heid, right, near Clifton in Bosque County. The wood-and-asphalt bridge that has spanned the Bosque River since 1884 is scheduled to be replaced with a more modern one made of concrete.

The Clifton Whipple Truss wood-and-asphalt bridge near Clifton, built in 1884, is the last functioning bridge of its kind in the state. "This is a bridge built by our founders," said Leon Smith, a former mayor and Clifton Record editor who is on the Bosque County Historical Commission.

Clifton residents Ashley Abel, center, points down stream while walking on the Whipple truss bridge with Leon Smith, left, Deb Tolman, and Jim Heid, right, near Clifton in Bosque County. The wood-and-asphalt bridge that has spanned the Bosque River since 1884 is scheduled to be replaced with a more modern one made of concrete.

CLIFTON — Crossing the North Bosque River bridge at Clifton City Park can be a white-knuckle experience for the uninitiated.

The wood-and-asphalt decking creaks, the rusted truss above begins to rattle and hum, and it's hard not to think about tumbling 50 feet into the shining river below.

But as local history buff Leon Smith sees it, that's the charm of the Whipple truss bridge that has spanned the river since 1884.

"Generation after generation of Clifton and Bosque County people have passed over this bridge and enjoyed it," he said, leaning on the rusted bridge rail. "In some ways, it's a scary bridge to cross because it's so narrow. It's like a ride at Six Flags."

Anyone who would consider that a thrill had better hurry to Clifton now, before it's too late.

Work began in July on a modern steel-and-concrete bridge about 10 feet away that will soon replace the last functioning Whipple truss bridge in Texas.

The $1.45 million project is being funded mostly through a federal transportation grant administered by the Texas Department of Transportation.

The project won't raze the historical bridge, which is owned by Bosque County. But once the new bridge is in place, the old one will be stabilized and stripped of its decking and approaches, leaving it as an inaccessible "monument."

That doesn't sit well with Smith and other local preservationists, who had envisioned the bridge as a centerpiece of heritage tourism for this town of about 3,500 people. Even if the town can eventually raise enough money to restore the bridge, he said, the new bridge would detract from it.

"This is a bridge built by our founders," said Smith, a former mayor and Clifton Record editor who is now on the Bosque County Historical Commission. "I can picture them coming over, looking over the sides, and it's kind of inspirational. To have a new bridge 10 feet from the old one is going to spoil the view."

Clifton Mayor Jim Heid, who was elected in May, said that decision can't be reversed, but he'd like to see a campaign to reclaim the old truss bridge as a bike-pedestrian bridge.

"It's a historical treasure, and future generations will be kicking themselves if nobody made a concerted effort to save it," he said. "There's too much of our history that's going by the wayside."

TxDOT officials bid the bridge in April, just shy of the deadline for spending federal funds for the bridge. The Federal Highway Administration first pledged money for the new bridge in 2000, but the project has been beset with delays, including issues of how to properly handle the historical bridge.

Michael Bolin, transportation and planning director for TxDOT's Waco district, said the old bridge could not be retrofitted to modern standards without compromising its historical integrity, and the federal grant required the new one to be built next to the old one.

He said the solution may not please everyone, but it balances public safety, historical preservation and cost concerns.

"It preserves this unique historical structure but also protects the access to the route there," he said. "No doubt, it's a mix of the old and the new, but we're going to retain the part of the structure that makes it historic."

He said the new bridge wouldn't block the view from the truss bridge, if it's ever restored, and the distinctive trusses of the old bridge will still be visible from the park and river.

Bolin said the old Whipple bridge isn't in eminent danger of failing, but its structural integrity declines by the year. Its bridge piers and foundations have eroded, its iron joints have rusted away and its metal components have become "deformed."

Bolin said the "monumenting" of the bridge will replace some bolts and rivets and protect the piers, slowing its decay. But a more thorough renovation project costing an additional $1.2 million would be required to make it safe for pedestrian use in the long term, he said.

"It will continue to degrade as time goes on," he said. "It's only going to be worse tomorrow."

Clifton residents generally seem to be in favor of restoring the bridge, but he doesn't expect such a project soon.

He noted the truss bridge is just outside the city limits and belongs to Bosque County, which is not interested in spending more money on it.

Even if the city were to acquire it from the county, raising the funds wouldn't be easy, he said.

Under the terms of the federal grant, if the money normally used for demolition is used to "monument" the bridge, as TxDOT is doing, the structure will no longer be eligible for future federal transportation funds, such as hike-and-bike grants.

There are no hike-and-bike trails near the bridge or along either side of the North Bosque River.

Deb Tulman, a local businesswoman and county historical commission member, said she'd like to lead a campaign to restore the bridge, but she said fundraising could be a hard sell.

She said the adjacent 80-acre Clifton City Park is underused and underdeveloped, and she thinks the new bridge will detract from the aesthetics of the old one.

Bosque County Judge Don Pool said the county would be willing to work with anyone to refurbish the bridge for pedestrian use, including the city of Clifton.

"There's a lot of historical elements to that bridge," he said. "We didn't just wake up and say, 'We want to tear that bridge down.' "

But he said leaving the old bridge in service for vehicular travel was not an option.

The bridge is one of five Whipple truss bridges left in the state, and the only one still open to vehicular traffic, according to the Texas Historical Commission. The design was patented in 1841 by Squire Whipple, the first engineer to calculate load dynamics on truss bridges.

The Wrought Iron Bridge Co. of Canton, Ohio, built the 150-foot bridge for Bosque County in 1884 for $6,456, according to the state historical marker for the bridge.

The bridge helped farmers bring their grain to Clifton's grain mill on the North Bosque, located at the low-water dam just north of City Park.

"In Clifton, the old mill was basically the mother ship of our town that everything revolved around," said Smith, who self-published a book about the "Old Mill."

"It allowed this to become a prosperous area and it provided jobs."

The bridge also helped open up new north-south routes in Texas. Before Highway 6 was constructed to the west of the Bosque River in 1941, the bridge carried traffic on Texas 67 from Waco to Clifton to Meridian.

The cross-state route also passed through the 80-acre City Park, which is notable today for the somewhat neglected stone masonry structures that the federal Civilian Conservation Corps built during the Great Depression.

Ashley Abel, Clifton Main Street manager, said there's definitely a need for the new bridge to serve farmers and others coming in and out of Clifton.

But she said the old bridge is still an asset, and its future depends on the community's priorities.

"As long as the bridge is there, the friends of the park and historical commission are always looking for an opportunity," she said. "But that's the question — is there an interest in this?"

"It's a historical treasure, and future generations will be kicking themselves if nobody madea concerted effort to save it. There's too much of our history that's going by the wayside."Clifton Mayor Jim Heid