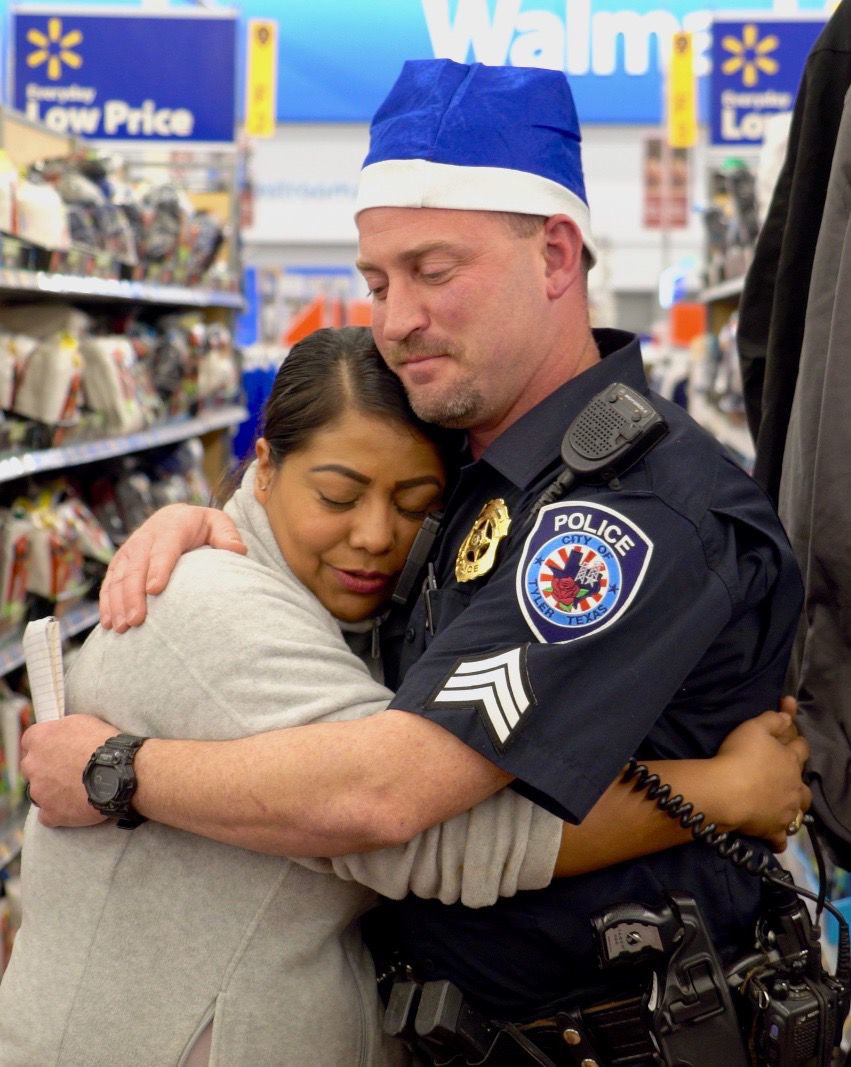 Officer Matt and Claudia embrace after recounting the emotional story of Matt saving Claudia’s life. Officer Matt was paired with Claudia’s family for the Blue Santa event to buy Christmas presents for her family. 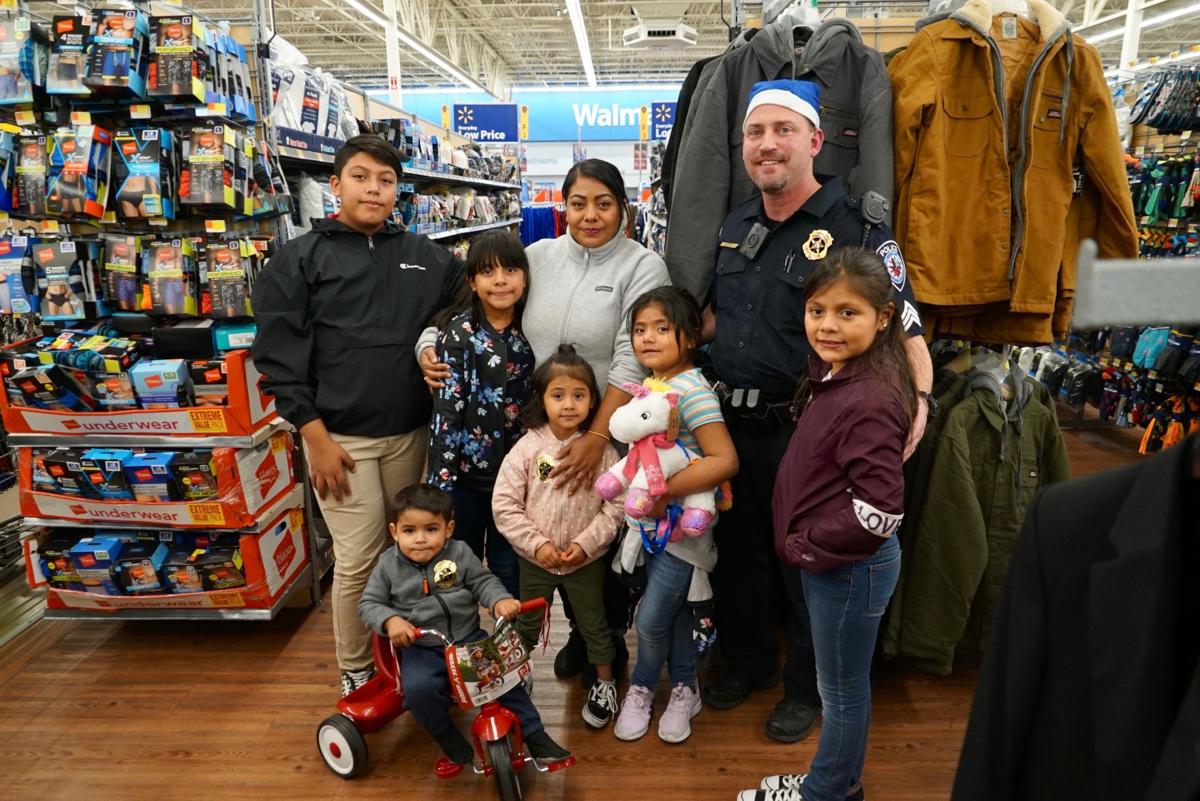 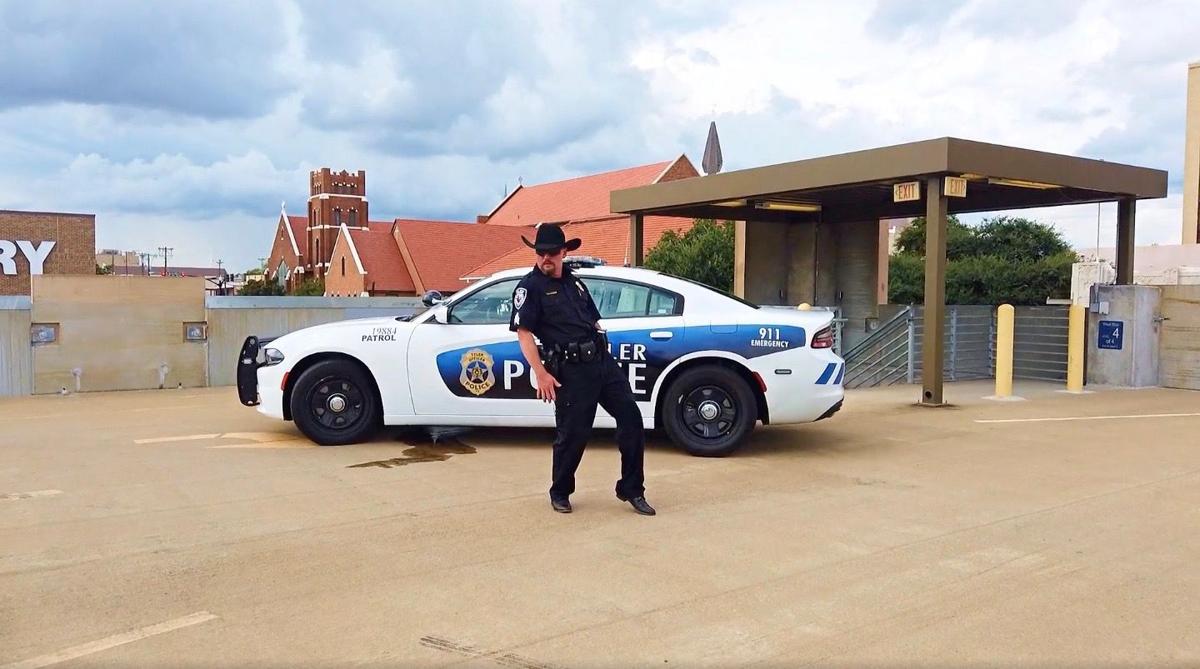 Officer Matt went viral on Facebook in September 2019 with his dance of the “Cowboy Boogie,” performed in downtown Tyler to benefit CASA for kids, a federally funded children’s advocacy program. 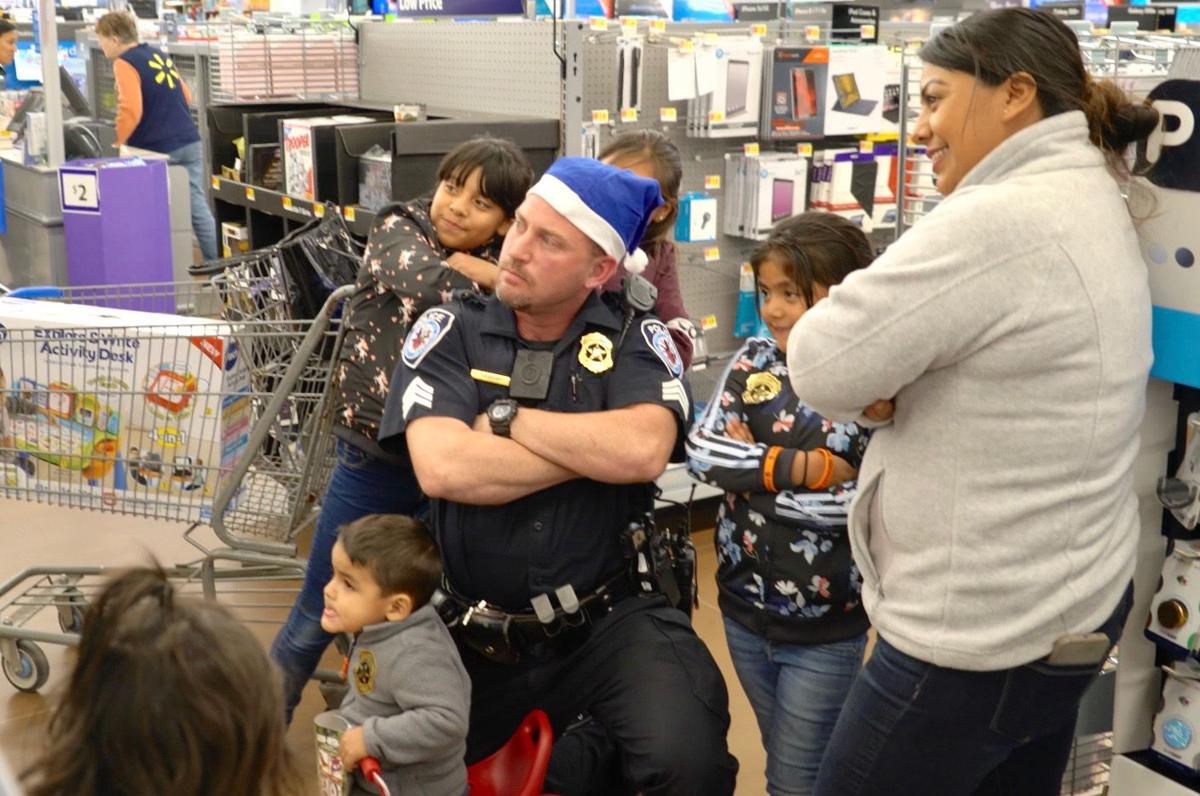 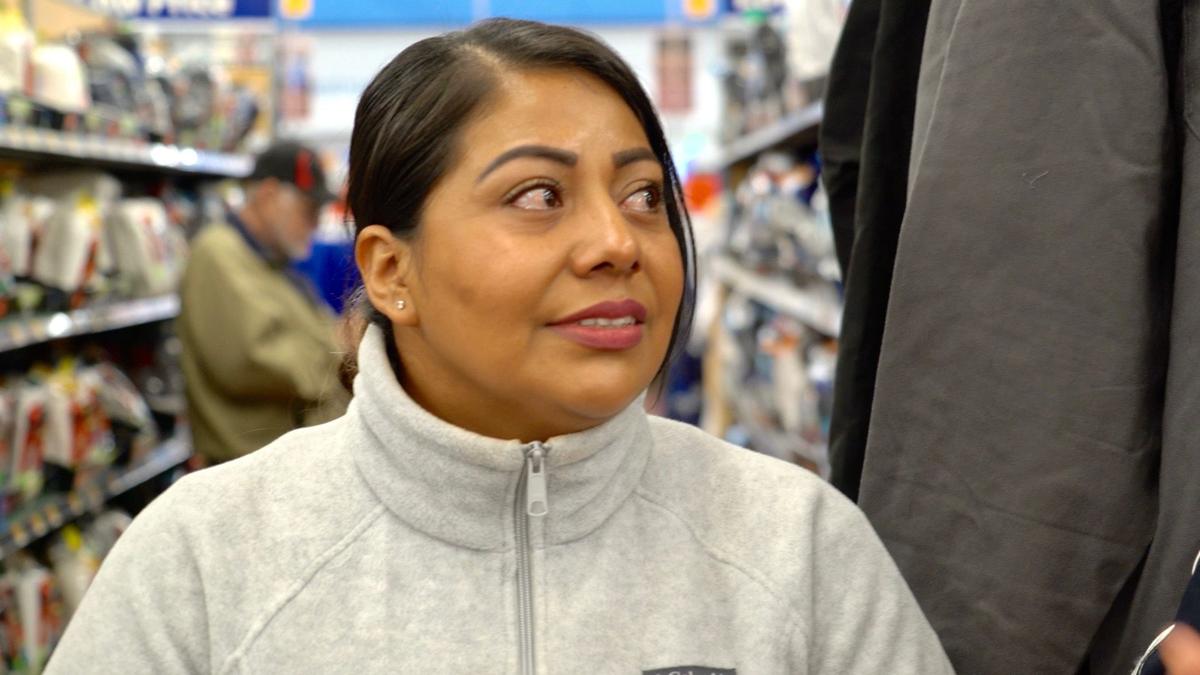 Claudia listens with tears in her eyes as her rescuer, Officer Matt, recounts the story of saving Claudia’s life after she passed out and stopped breathing. 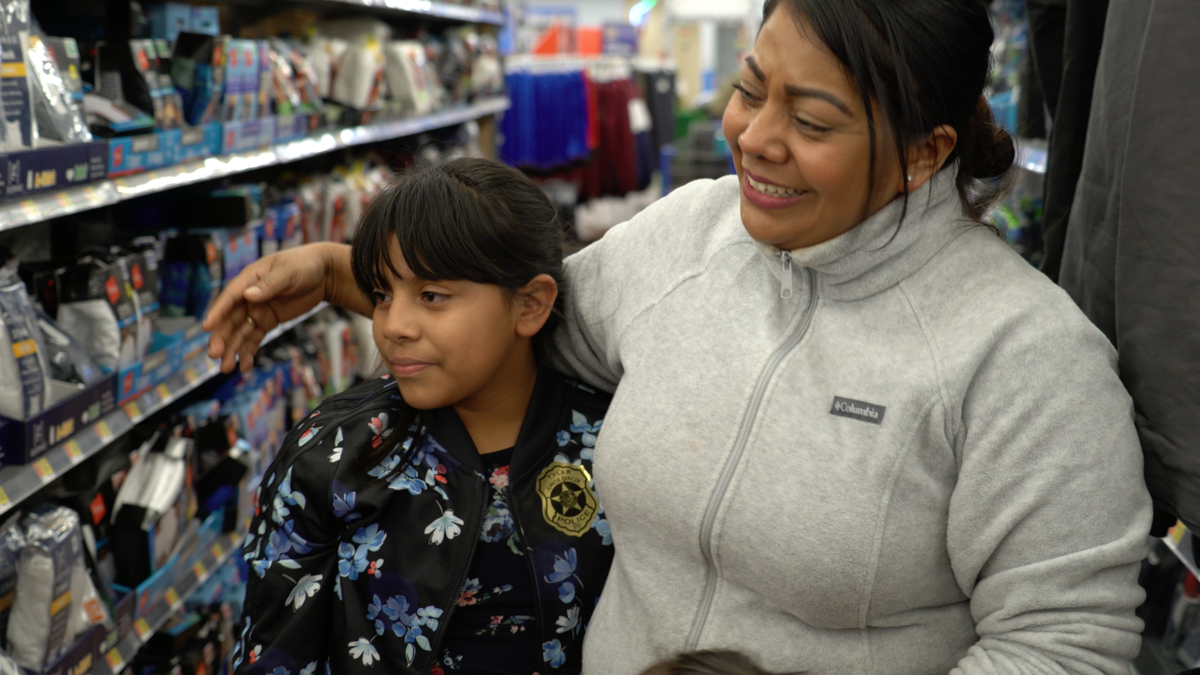 Claudia embraces her daughter, Meredith, after a heartwarming thanks to Officer Matt for saving her mother’s life.

Officer Matt went viral on Facebook in September 2019 with his dance of the “Cowboy Boogie,” performed in downtown Tyler to benefit CASA for kids, a federally funded children’s advocacy program.

Claudia listens with tears in her eyes as her rescuer, Officer Matt, recounts the story of saving Claudia’s life after she passed out and stopped breathing.

Claudia embraces her daughter, Meredith, after a heartwarming thanks to Officer Matt for saving her mother’s life.

Friends of Claudia Gonzalez know she is a strong-willed single mom of six children, and that each day she works, the money goes toward making ends meet at home. They also know she did not have health insurance.

So each time she fainted at work, they would give her smelling salts. She would come around and get back to her job at the restaurant where she works. One always did the trick.

On Sept. 27, Gonzalez went down again. This time, several packs of smelling salts did not work. A fellow worker at Casa Ole rushed out the door and saw a city of Tyler police car at CASA (Court Appointed Special Advocates) for Kids of East Texas. The car was there because Tyler Police Sgt. Matt Leigeber was having a fundraiser for foster children.

Leigeber ran to the restaurant, saw employees doing chest compressions, checked Gonzalez and realized she was having a seizure. He performed CPR, an act that saved her life.

But Leigeber wasn’t done. Not only did he save her life that day, he took her for an MRI — and paid for it. The doctors found a tumor.

“The two heroes were the employees at Casa Ole doing chest compressions,” said Leigeber, who had raised more than $5,000 for CASA thanks to a “Caught Doing Good for Kids,” campaign and his viral video #GitUpChallenge, which has had more than 1.2 million views.

The money went to train volunteers who in turn help foster children in Smith, Wood and Van Zandt counties.

But the help did not end there. Leigeber wanted to know about the woman he saved. He reached out to Paulina Pedroza, who connected the police officer to the victim.

Leigeber realized she needed the MRI and even started taking Spanish classes to help communicate with the family.

“Paulina is very connected in the community. She is well-respected in the Hispanic community and our concern was how is Claudia going to handle six kids with this condition,” Leigeber said. “When we met up with Claudia, she said, ‘I have to fight this for my kids.’ Paulina has helped rally the community.”

Last week, the two were reunited, this time with all of the kids during the Blue Santa Shop with a Cop program. And of course, Leigeber was partnered with Gonzalez and her kids. When the toys exceeded the amount of donated funds, the sergeant quietly reached into his pocket for the extra money. After helping them load up, he had another item on his list. Just before Christmas, he delivered a new car seat.

At Walmart, the kids stopped before the register and one-by-one thanked the man who saved their mom and Christmas.

“I am really thankful Officer Matt saved my mother’s life. If it was not for him, my mom would not be with us now ... thank you,” son Brandon said.

Said Meredith: “I am very thankful to Officer Matt for saving my mom’s life. If it was not for him, we would not have a mother and someone with the same love for us.”

Leah added: “I am thankful for him because he saved my mom’s life.” Allison and Victoria both thanked him for the presents and making them happy. Then, Victoria and little Axel cried and hugged mom and the police officer in the middle of Walmart.

Wiping away tears, Gonzalez said, “Never did I think I would be shopping like this for my kids. It is something very wonderful. I thank God he (Leigeber) was in the right place at the right time to save my life and make my kids happy. I have no money at all from paying medical bills. And I do not know what is going on.”

And once again, the police officer refused to take the credit.

“I think this was meant for me as much as it was for her. She needed help, it was very obvious, with six kids,” Leigeber said. “Her kids are super fun, I’ve spent some time with them since the incident. Everyone needs help sometimes. I was just honored to help.”

A bank account to help the Gonzalez family is set up at VeraBank in Tyler.