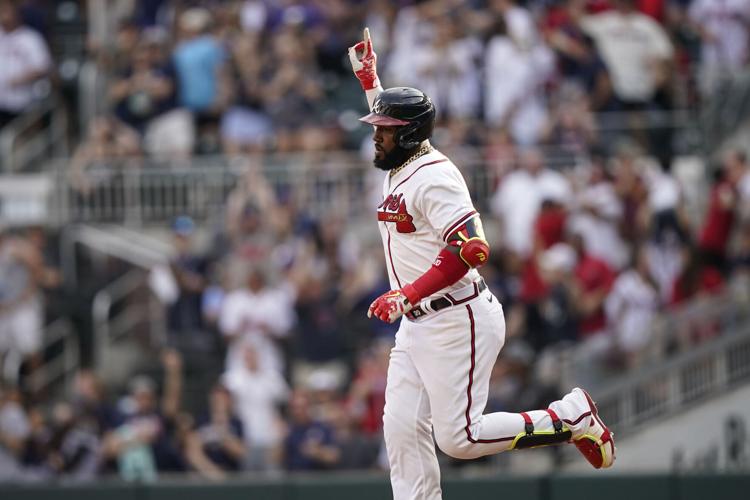 ABOVE: Atlanta Braves’ Marcell Ozuna celebrates after hitting a two-run home run in the eighth inning against the San Diego Padres on Saturday in Atlanta. RIGHT: Texas Rangers’ Eli White slides to steal third base during the first inning against the Boston Red Sox in Arlington on Saturday. 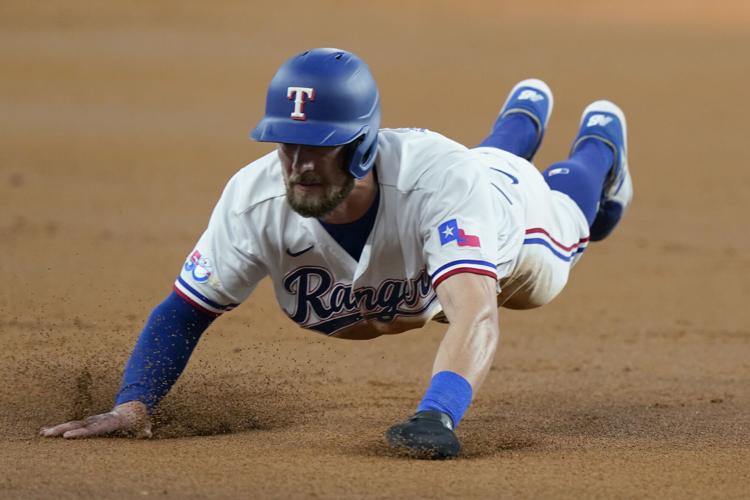 Texas Rangers’ Eli White slides to steal third base during the first inning against the Boston Red Sox in Arlington on Saturday.

ABOVE: Atlanta Braves’ Marcell Ozuna celebrates after hitting a two-run home run in the eighth inning against the San Diego Padres on Saturday in Atlanta. RIGHT: Texas Rangers’ Eli White slides to steal third base during the first inning against the Boston Red Sox in Arlington on Saturday.

Texas Rangers’ Eli White slides to steal third base during the first inning against the Boston Red Sox in Arlington on Saturday.

ATLANTA (AP) — Marcell Ozuna homered and Austin Riley hit a tiebreaking double during a four-run rally in the eighth inning in the Atlanta Braves’ 6-5 victory over the San Diego Padres on Saturday.

The game appeared to turn in San Diego’s favor in top of the eighth when first baseman Matt Olson misplayed Trent Grisham’s grounder for a two-base error with one out. Grisham advanced on Will Smith’s wild pitch and scored on Jorge Alfaro’s single to tie it at 2.

After Jake Cronenworth doubled, Jurickson Profar drew a walk to set the stage for Braves closer Kenley Jansen (2-0) to face Manny Machado with the bases loaded. Machado hit a grounder to Riley at third base, but his throw to second sailed into shallow center field for an error that allowed two runs to score. San Diego added another run to make it 5-2 on Eric Hosmer’s RBI forceout.

The defending World Series champion Braves have won four of six to improve to 16-18.

The Yankees, with the best record in the majors, had slugged away for a total of 25 runs in taking the first two games of the series. They rallied for the tying run in the ninth inning, but a baserunning mistake cost them a chance to score more.

With one out in the Chicago ninth, Tim Anderson singled and Yoán Moncada walked against Chapman (0-1). Robert followed with his big hit to right, setting off a lively celebration on the field. Moncada homered and Dallas Keuchel threw five shutout innings for the White Sox, who have won eight of 11.

ARLINGTON (AP) — J.D. Martinez extended his on-base streak to 31 games with a first-inning homer, 42-year-old Rich Hill pitched into the seventh in his return from the COVID-19 list and Boston beat Texas for its first series victory in a month.

Rafael Devers also homered for Boston, which set a season high for runs and has won the first two in the three-game weekend series. Kiké Hernández drove in three runs — with a sacrifice fly in the second inning, a fielder’s choice grounder in the fourth and a double in the fifth.

Hill (1-1) threw 64 of his 94 pitches for strikes in his first start since May 5. The left-hander struck out four without a walk while allowing three runs and seven hits.

PITTSBURGH (AP) — Zach Thompson took a no-hitter into the sixth inning and Daniel Vogelbach homered to lead Pittsburgh past Cincinnati.

Brandon Drury broke up the no-hit bid by lining a clean single to right field with two outs.

That was the only hit allowed by Thompson (2-3) in six innings. He had three walks and three strikeouts while throwing 76 pitches and combining with Wil Crowe, Chris Stratton and David Bednar on a four-hitter that ended the Reds’ three-game winning streak.

Bednar retired the last four batters for his sixth save in as many opportunities.

Vogelbach’s 433-foot leadoff home run to center in the fourth made it 3-0. It was Vogelbach’s team-leading sixth homer and the game’s lone extra-base hit.

Yadier Molina opened the second with a double off the top of the right-center field wall for his 2,128th career hit, moving him past Mike Piazza for sixth most among catchers.

Tommy Edman homered as the Cardinals won for the second time in seven games. St. Louis has homered in 10 straight games.

Manager Dusty Baker and the Astros fell one game short of matching the franchise record set in 1999 and matched in 2004 and 2018.

Houston starter Cristian Javier (2-1) was tagged for seven runs and eight hits over 3 2/3 innings. Jose Siri had a homer, triple and a single for Houston.

Josh Rogers (2-2) worked one inning for the win.

The A’s trailed 3-1 with two outs in the ninth before rallying against closer Raisel Iglesias (1-1).

Ramon Laureano doubled and Christian Bethancourt walked before Barrera launched the drive into the right-field seats in his 17th career at-bat. Barrera had made an error in left field that allowed the Angels to score their third run.

Lou Trivino (1-2) retired Mike Trout with two on and two out to end the ninth to earn the win.

Trout came off the bench and was part of a two-run rally that gave the Angels a 3-1 lead in the eighth.

Hernandez, who missed three weeks with a sore left oblique, hit his second homer of the season. Jansen was activated Saturday after being sidelined for more than a month with a strained left oblique. He hit his third homer in only his ninth at-bat this year.

Both homers came off Ryan Thompson (1-2), who also gave up singles to Santiago Espinal and Lourdes Gurriel Jr. in the decisive four-run inning. Tim Mayza (2-0) got the win in relief after striking out two of his three batters in the seventh.

Yandy Diaz led off the Rays’ first with an opposite-field home run.

DETROIT (AP) — Tigers starter Michael Pineda exited early after being hit in the hand by a line drive and the Detroit bullpen did the rest, teaming on a four-hitter to beat Baltimore.

Pineda retired all four hitters he faced, but the righty had to leave after Ramon Urias’ liner hit him in the pitching hand in the second inning. Wily Peralta replaced him, with the game delayed to give him time to warm up. Peralta (1-0) set down eight batters and four more relievers finished. Gregory Soto pitched the ninth for his fifth save.

MINNEAPOLIS (AP) — Andrés Giménez ripped a go-ahead double in the 10th inning and scored after a collision on the bases in Cleveland’s victory over Minnesota.

Giménez scored the automatic runner, but ran into Minnesota first baseman Jose Miranda as he turned the corner toward second. He was shaken up and met with an athletic trainer but remained in the game. Umpires awarded him second base, and he then scored on Myles Straw’s single. Twins manager Rocco Baldelli argued the decision to award Giménez second base and was ejected.

Nick Sandlin (3-1) pitched 1 1/3 scoreless innings of relief for Cleveland. Emmanuel Clase allowed the automatic runner to score, but still earned his seventh save.

A day after leaving early because of stomach discomfort, Avisaíl García singled twice for the Marlins, who snapped a five-game home skid.

Salvador Pérez hit a two-run homer in the third, the only frame in which the Royals scored off Márquez (1-3), who went six innings and allowed three runs and three hits. He struck out six and walked one. In his previous six starts, Márquez was 0-3 with a 6.47 ERA.

PHOENIX (AP) — Yan Gomes hit a solo homer and added a go-ahead single in the ninth inning in Chicago’s victory over Arizona.

The Cubs have won three out of their past five games after dropping eight of nine.

Rowan Wick worked the ninth and gave up one run before earning his third save. Mychal Givens (3-0) threw two-thirds of an inning of scoreless relief.

It was another tough outing for D-backs reliever Mark Melancon (0-5), who didn’t record an out and let the first four Cubs batters of the ninth reach base. Arizona signed the veteran to a $14 million, two-year during the offseason.